Talk to me at:

Things I talk about

Everything has a ground floor, a baseline. The baseline drives everything, it functions as the core status quo in which everything is compared to. Without it comparisons would be harder to find. A baseline is nothing more than a defined set of standards that everybody can agree on is acceptable. For the sake of this essay I will define the baseline as the simply the average.

Think of a bell curve, it’s a simple bell shaped graph increasing from right to left until it hits a certain value, then it proceeds to decrease from that value downwards in perfect symmetry.

Sitting the middle is the average, the baseline in which everything is measured relative to. If you fall on the right side of the baseline you are under performing, if you’re on the left you’re over performing. The x-axis shows the measured value, the y-axis is the frequency. If you’re a runner and you typically run at an average pace of 9 miles those 9 miles sit directly in the middle of the curve. When you have an off day and run 7 miles you’re performing on the right side of the graph, and on days when you have enough stamina to go for a half marathon you’re on the right.

The baseline isn’t static, in fact it moves all the time, a common way that you can move it is by setting goals. A goal is a new baseline you’re trying to reach. 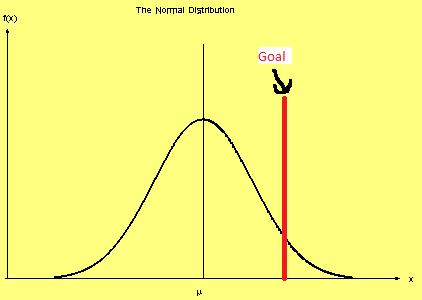 When a goal is set you begin incrementally moving the bell curve towards this new desired baseline. In the case of running let’s say you plan on increasing you average distance to 15 miles. So you begin incrementally growing it, day by day. First you increase your stamina by running ten miles more often, then eleven, then twelve, all the way until you hit your desired average of fifteen. Once it becomes easy for you, you developed a new baseline, a new average in which to measure all things with.

However a strange thing happens when you move this baseline. What is not illustrated in these graphics is that everybody has their own baseline, you have your own average, but there are also global averages and community averages. If you push yourself further away from the global average you know you’re doing pretty well, however in that case you will end up entering a new tier, a new community in which you are compared to.

When running you used to be compared to the 10k runners a lot, there you were a top dog running three more miles compared to them, but you were below average for the half marathon runners. Well now you’ve hit fifteen miles, you’re doing roughly two more miles than the half marathoners out there, you’re looking pretty good, but yet fifteen miles is now eleven miles shorter than a marathon. On average you’re better than the global average of all runners, you’re better than the community averages in the 10k and half marathon communities, but your still far behind the averages of the marathon runners.

It can be easy to get blinded by the fact that you’re not doing your best when compared to the marathon runners, pride is a powerful emotion, but that’s fine. What matters is that you moved the baseline and that you’re already outperforming your old baseline. It could be hard to accept that you’re not there yet, but don’t let that hold you back, you’ve already increased your baseline once before, you can do it again. After all, progress is progress.

Inside your phone is a lies an garden of apps, an ecosystem curated to you by you, but an ecosystem that has one singular source of nourishment: you. Your time, your engagement, your information are all valuable resources for each and every one of those apps, without you they wouldn’t exist.

Like the sun shining down and providing the energy needed to sustain life on Earth, your face is a beacon of light and primary energy source for each of these apps. However, unlike the sun, your time with them is limited and can mostly be used on a one by one basis, and sometimes neglected all together when you’re spending time away from the screen. In short, unlike the sun, you are a scarce resource, and whenever an ecosystem can only survive on a singular scarce resource competition is inevitable.

Through competition these apps are forced to evolve and develop new tactics to hold your attention as long as possible. Each and every single one of them must adapt or perish, creating an arms race. Maybe the app begins filling your phone with notifications to remind you of a new status update, or by consolidating all your communications to one messenger, or create reward systems via refreshing the page to show you new things that you’re guaranteed to like. Like biology each one has developed a means to survive in a an every growing ecosystem.

Think of the apps on your phone, which ones take most of your time? Are they necessary? And if so are they needed to the extent of which you use them? Do you enjoy using the ones that aren’t necessary? How often do you use them? Apps are like food, you can eat whatever you want but it’s great to keep your diet well balanced.

Think of your phone as a garden and you are the gardener, you have complete control over what you plant in it and what you decide to eat. It is your job to maintain a healthy information diet, and I don’t doubt that you do, however at times it can be easy to over indulge in less healthy meals. They taste good, that’s fine, but like sweets if you consume too much you might be happy in the moment, but not in the long run. So maintain your garden and your meals to support a more balance diet. Perhaps you set up apps like BlockSite or Cold Turkey to prevent yourself from accidentally indulging during pre-determined hours, or maybe you only access one service through the web browser only instead of providing a space in your garden for it to grow. Maybe you see your indulgence might be getting out of hand and it’s time for a fast or diet plan.

Your phone is a wonderful ecosystem of amazing apps developed by brilliant people to give you the experience you want. However, like all ecosystems competition is inevitable, especially when given a singular scarce resource like your own attention. Be the gardener of your own ecosystem, but beware that if you don’t attempt to take control of it, your garden will become overrun and taking you with it.

We only have so much time in the day, make sure you’re the one deciding how you want to spend it.

This essay was inspired by CGP Grey’s video essay “Thinking About Attention”, Hello Internet Episode 108 “Project Cyclops.” If you are interested in ways to tend to your garden in a healthy manner, or are worried you’re over indulging on certain apps, I highly recommend you check out Time Well Spent. Time Well Spent is an ongoing project to promote human centered design and make your phone work for you in a symbiotic relationship, instead of competing for you.

If you’re a productivity junkie like myself it’s easy to get overwhelmed in the world of tips, tricks, and hacks to make it easier to get things done. From Tim Ferris to books from small time bloggers, each telling you that if you were to do this one simple thing your life would get so much better and you can reach your goals better.

The next thing you know your morning routine consists of reading for ten minutes before leaving bed, a three mile run, a twenty minute meditation, a five minute ice shower, three minutes of gratitude journaling, cooking your own meal, and then leaving for work. Every day at work you use five planners with different methods to keep your day and notes organize, you take long lunch breaks to exercise again, and only eat keto. At night before bed you meditate again, journal about your favorite parts of the day, fill in spreadsheets about your daily performance. By the time you realize it it’s midnight and you have to be up at 5am to begin your day again. Living a life with taking the advice from every productivity guru out there is overwhelming and unsustainable.

Now what I am not saying is that you should just abandon everything, or that all productivity gurus are wrong. What I’m saying is that you shouldn’t let these tips and tricks cloud your judgement and take away your time. You only have so many hours in the day, you should use them the best way you can. I once spiralled down into a hole of productivity systems that ate too much into my mornings and evenings that everything felt more like a chore that I had to get off my checklist, or else! The example above is pretty damn close to what I went through, until one day it hit me. I was doing this all wrong. These habits and routines weren’t the solutions to my problems, they were only tools to be used as a means to solve my problems and attain my goals. So I went back to the drawing board and reflected on what I wanted.

Progress is progress, that’s all what matters. Incremental or substantial, up or down then back up again, it doesn’t matter how much progress you make as long as you keep on pushing forwards. Every day we all try to make our situations a little better, but we can’t win every day.

Sometimes you just have days that push back on you so hard that it is impossible to fight back. Maybe it’s a big bill you have to pay, maybe it’s a heartbreaking end of a long term relationship, we each have our own hurdles in life. But it’s not that setbacks that matter, it’s how you deal with them and how you work yourself out of the hole you’re in. You have to make progress, because in the end progress is the only thing that matters.

Progress is progress doesn’t just apply to loses, it applies to victories as well. If you’re life is going well don’t settle for stagnation, find ways to grow yourself and goals to aspire towards. Read every morning, hit the gym during your lunch breaks, write every day for a month. Sometimes you’ll have days with small wins, others with substantial and sometimes life changing wins.

Progress is progress, that is all that matters. If you’re feeling defeated or stagnant you can always grow from there. Keep yourself growing every day. Make every day a building block to a better future and more fulfilling life, and build yourself into the human you can become. Progress is progress.